AquAid and the Maasai Sports Bottle 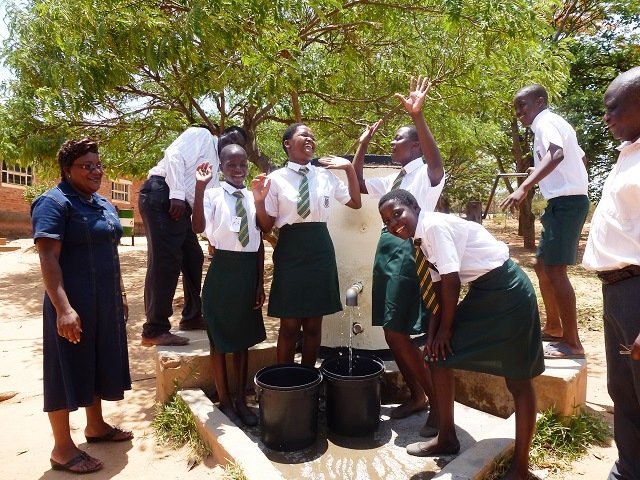 It’s thanks to the partnership between AquAid and The Africa Trust that close to two million people in Africa will have enough clean water to drink and use this Christmas and in the years to come.

The children at St Columbus School in the Honde Valley in Zimbabwe are able to drink clean water from the Elephant Pumps at their school and in the surrounding villages where they live.

They also use water from the pumps to grow vegetables and bananas.

In Tanzania, many thousands of people benefit from gravity fed water pipelines funded by AquAid in areas where there was previously a terrible water shortage.

An Elephant Pump programme was also launched by AquAid and the Africa Trust in Tanzania this year, which could grow to benefit hundreds of thousands of people. It is important to remember that it is not only in drought years when Elephant Pumps save lives, as the dry season comes every year.

What about children in Tanzania who live a nomadic existence? Maasai boys as young as eight years old routinely travel with herds of cattle and goats for months at a time and often drink the same dirty water as their livestock. Most Maasai people who live traditionally in Tanzania and parts of Kenya lack sustainable access to clean water. As a result, water borne disease is by far the biggest killer and cause of disease in these communities.

The Africa Trust has recently launched a pilot project, which is helping to provide Maasai, who live in parts of the Arusha and Kilimanjaro regions, with a way to have their own personal supply of clean water. This project aims to reduce the burden of water borne disease in traditional Maasai communities by helping them have access to clean water through a simple innovation.

This ‘Maasai Sports Bottle’ is built on a foundation of research and innovation (by the Africa Trust team) in the local production of simple ceramic filters, which combine clay and charcoal. A previous innovation involved pyrolisis: heating a mixture of clay and sawdust with reduced oxygen. A simpler and more effective method has since been developed in which powdered charcoal from burnt wood is thoroughly mixed with wet clay and pressed into the lid of a Maasai water gourd.  Once dry, the clay ‘cork’ is lightly heated in a fire until the outside colour has changed. This method produces an effective filter through which Maasai can safely drink water sourced from dirty stagnant pools. The water can be drunk from a gourd without removing the lid, like a sport bottle.