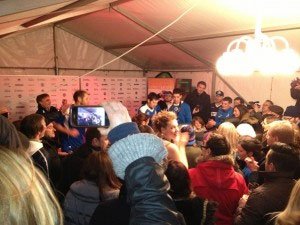 There are seven billion people on this planet and only one has run 521 miles on a treadmill in a week!

AITC’s Dan Lawson broke Sharon Gayter’s incredible record in the early hours of this morning, surrounded by well-wishers and supporters including Albion in the Community’s Dick Knight, Alan Sanders and Michael Edwards, plus Albion’s chief executive Paul Barber, who ran for an hour with Dan earlier in the evening alongside club chairman Tony Bloom.

In an electric atmosphere, Dan’s seven-day mission came to a climatic end amid raucous cheers, and quite a few tears, at 12.20am. Running over three marathons a day, the 40-year-old from Hove tested his mental and physical strength to the absolute limit battling through severe stomach pain, sleep deprivation, and creaking joints to break a world record that may never be eclipsed.

Buoyed throughout the final day by his favourite music from the early 1990s and unstinting support from his colleague Stuart Christie, friends Charlotte Jalley and Lewis Pilgrim, and his two daughters Lilly and Ruby, Dan also managed to conduct three TV interviews – two live – and four on the radio!

Dan’s stunning achievement was to raise funds and awareness for AITC’s children’s activity projects, designed to keep their youngsters healthy and active.

All of us here at AquAid and specifically those at AquAid West Sussex, who sponsored Dan’s Water Coolers and drinking water, would like to say congratulations to Dan on an absolutely phenomenal achievement!