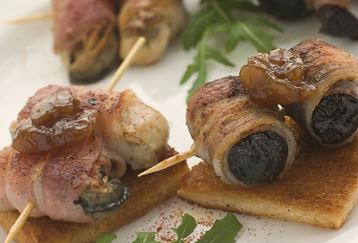 Recently I blogged about various dishes with really bizarre names that originate from different cultures. I also mentioned that we Britons certainly aren’t alone when it comes to naming our scoff weirdly.

I said that at a later date I’d be expounding further on more of these dishes found in Britain, so without further ado, I present these to you.  I’m going to grade these dishes in the following manner – the more unsightly or unpalatable a dish (in my very unprofessional opinion) – the more glasses of water you need to drink while consuming the dish.

Toad in the hole
Perhaps Britain’s least appetisingly-named meal, this dish of sausages in Yorkshire pudding batter is said to have gained its unusual moniker because it looks like toads popping their heads from a hole (yes, I know, I can’t really see it either). Can’t stand the dish? At least you’re not eating it in the Victorian period, when it was common to use any available meat, however old or unpleasant. Mrs Beeton suggests rump steak and lamb kidney. ~ ½ a glass of water.

Bubble and squeak
Once upon a time, thrifty Britons with left-over vegetables and potatoes from a roast dinner wouldn’t have even considered throwing them away – they’d have fried the remnants up to make bubble and squeak. The name comes from the sizzling noise the vegetables make in the pan, though it could also adequately describe the horrified sounds your children emit next time you propose to cook it. ~ 0 glasses of water. Delicious meal if cooked right.

Welsh rarebit/rabbit
Tourists in Wales must be regularly disappointed to find that the traditional ‘rabbit’ they’ve ordered is little more than a gourmet version of cheese on toast. The name is said to be something of an English joke, coined in the 18th century when many Welsh were so poor they could not even afford a cheap meat like rabbit. Hilarious. ~ 0 glasses of water. Delicious.

Stargazey pie
Stargazey pie sounds rather quaint, but this Cornish dish of pilchards baked under a pastry crust won’t appeal to everyone – it traditionally has fish heads poking through the crust, so they appear to be gazing up at the sky. Legend has it that the dish originates from the village of Mousehole, where a plucky fisherman called Tom Bawcock once saved his fellow villagers from starvation by braving the stormy seas to catch a record haul. The fish were baked poking out of the pies, to prove to everyone that there was fish inside. ~ 1 glass of water.

Anyone who’s been within smelling distance of this particular cheese understands the first part of its name: The wheels are said to have an odour that brings to mind dirty socks and wet towels. But the second half is purely coincidental. It’s actually derived from Stinking Bishop pears, whose juice the cheese is immersed in. The pears got their name from their farmer, Mr. Bishop.

~ 2 glasses of water.  And a clothes peg for your nose.

Oddly enough, headcheese isn’t cheese at all. But you’re going to wish it were. The gelatinous meat is made from chopped-up bits of the head of a pig, calf or cow – including the tongue – and sometimes the feet and heart. The origins of its name are unclear, but it’s been suggested the source of the name could be either because the recipe used to contain cheese or because of the connected etymology of the words cheese and moulded (moulds are used to make headcheese).