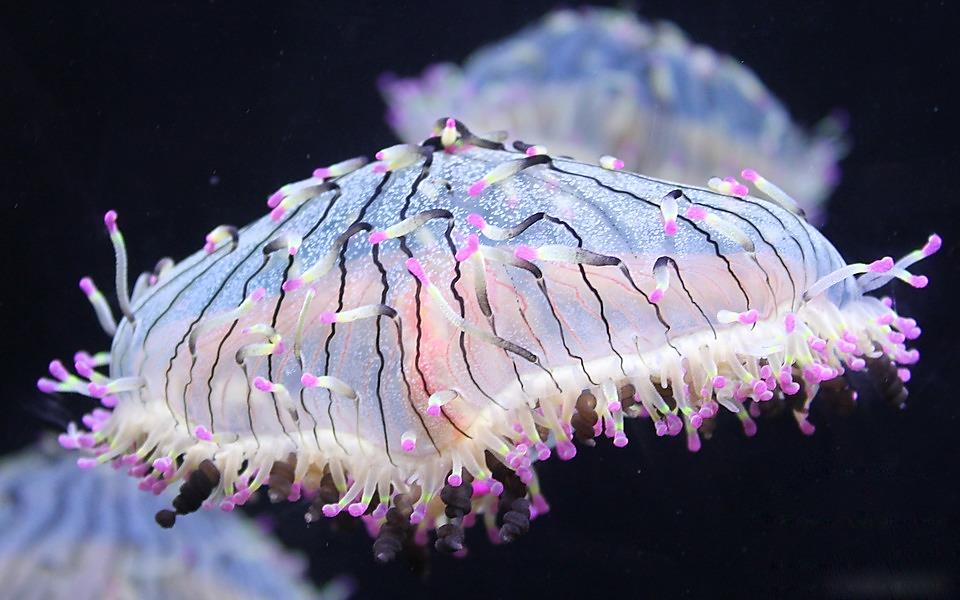 Jellyfish and me – we don’t have the happiest co-existence historically – jelly, totally different story. Mulberry and orange flavoured jelly remain my favourites, but before I get sidetracked …

The unfortunate history began with summer hols at the ocean, wonderful soft sand beaches, monster waves, and oftentimes, a beach littered with jellyfish called blue bottles or are they are otherwise known – the Portuguese Man o’ War. Fierce creatures these, with an absolutely awful sting and to make matters worse, if you encountered the ‘stinger’- they’d continue to sting you repeatedly. I think we called them blue bottles because, well, they were blue – and a very pretty blue too. According to the wonderful Wiki though, it turns out that blue bottles are not really jelly fish – although they closely resemble them, but are in fact a species called a siphonophore, which is distinguished from jellyfish in that it is not a single multicellular organism, but a colonial organism made up of specialized minute individual organisms called zooids. Anyhow, suffice it to say, I really did gasp and cringe in the scene in ‘Finding Nemo’ when Nemo and Dory are trapped in the flotilla of pretty pink jellyfish – I felt their (nonsensical imaginary animated creatures) pain!

That’s your biology update for the day sorted then.

The amazing glow in the dark jellyfish was recently spotted during a deep water exploration mission of the area being conducted in the Mariana Trench.  The Trench is the deepest part of the world’s oceans. It is located in the western Pacific Ocean, to the east of the Mariana Islands. The trench is about 1,580 miles long but has an average width of only 43 miles. It reaches a maximum-known depth of 6.831 miles.

While experts were able to identify the jellyfish as belonging to the genus Crossota, they are unable to assign a precise name to the pretty hydromedusa.

They filmed the jellyfish ‘floating’ through the depths with its long tentacles extended outwards and its bell motionless, suggesting ‘an ambush predation mode’.

It is thought the red colour in the bell is the creature’s radial canals, while the bright yellow may be its testes. So the photographed jellyfish may (or may not) be male.

Other deep sea life was also captured on film but so far, in this exploration, it seems as if the jellyfish is a hereto previously undiscovered species.

Although I can’t wait to share the news with my colleagues on my next water run, I must say, there’s a part of me that wishes that perhaps it would be better if such wondrous creatures were better left undiscovered, to continue their unknown existence in all their dark, watery wonder.