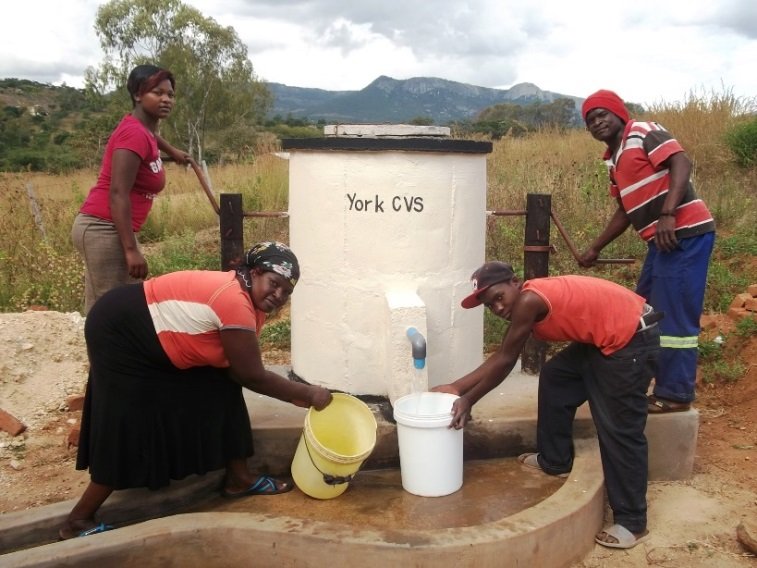 Wishing for a Water Well

Here at AquAid, we’ve adapted the concept of the wishing well slightly by ensuring that through the provision of water coolers to our valued customers that this translates into building actual water wells for those less fortunate in Africa.

How it works is that AquAid, who long have a history of supporting sustainable charities, formed a charity called The Africa Trust. This organisation is responsible for building said water wells or, as they are affectionately known, Elephant Pumps. Using donations from a portion of the revenue raised from the sales of water coolers, The Africa Trust have built more than 5 0000 Elephant Pumps throughout Africa, which provide more than 2 million people with safe drinking water. The pump is built (see photograph online in the article) using a modified design based on an ancient Chinese rope pulley system that uses materials that are easy to repair and maintain locally.  An Elephant Pump can last for more than 15 years and its design is such that 95% of built pumps continue to operate throughout the continent.

We recently invited York CVS, a Leeds based AquAid customer, to participate in a well building campaign and were delighted when they graciously accepted.

York CVS themselves are all about help and support. Since 1939, York CVS has supported thousands of local charities, voluntary organisations and social enterprises to focus on what they do best – making a difference.

They provide a range of support, training and advice to help organisations set up, flourish and even finish if they feel their work is done.

Ruth Stockdale, Communications and Marketing Adviser at York CVS expressed enthusiasm about the well building campaign, “York CVS is proud to be working with AquAid and is delighted that by providing clean, fresh water here in York, we are able to support others to receive the same benefits in Africa.”

York CVS’ decision to participate in this water pump building campaign means that a rural community in Africa will now have access to safe, clean drinking water.

If you currently have an AquAid water cooler and would like to find out how you can go about sponsoring your very own water well, at no extra cost, please contact us.

If you would like to enquire about purchasing a water cooler, drop us a line or give us a shout at any of the above. We’d love to be able to assist. And you can, of course, be very well (ha) on your way to sponsoring your very own water well.

The Elephant vs. The Water Cooler

A few moons ago, I was invited to travel with a friend to an exclusive lodge in The Kruger Park. I was to be the site inspection photographer. Bliss.  The lodge had 10 suites (yes that type of exclusive) and was run by a lovely husband and wife team.  Sadly, a few weeks before, there had been a serious bush fire in the region, so a lot of the greenery – trees especially – were now just stunted, blackened twigs. In the arrival / parking area of the lodge, there was, however, a beautiful thriving green tree. The reason that this tree made it was because it ‘belonged’ to the lodge and was kept watered and was protected during the fire.

Anyhow, we returned from a game drive and retired to our suite to prepare for dinner.   At about 7ish, we all sit down for dinner with the husband and wife team who are our hosts.  We chat about our day, what we’ve seen as we enjoy the delicious food that has been specially prepared for us. Just before main course, an askari* approaches the husband and he steps away from the table – something requires his attention.

Now, the lodge is set up on a hillside, the magnificent veld** falling away beneath us and with the glassed-in dining room, we have an almost 180° view of the land surrounding us. Now, understandably, it’s pitch dark as it’s night time. Except for, all of a sardine, I can see headlights from a Landrover (one of the game drive vehicles) advancing, then stopping, then reversing, then stopping, then advancing again (you get the picture) … this carries on with much hooting and some choice language from the occupants of the Landy for a good 30 minutes or so.

The rather charming lady of the lodge then explained that her husband, who was a qualified game ranger, amongst other things, was rather passionate about this single tree in the entrance. He had apparently planted it and kept it watered from a sapling. In his opinion this tree was in the lodge ‘garden’ (although there are no fences at all at the lodge) and therefore belonged to the lodge. He had saved said tree from the fire. The problem was that there was a young bull elephant that was hungry and in his opinion, this tree was the only one that had edible bits on it, especially as the other trees were all burnt. So, after dark, the young elephant came for dinner. The husband wasn’t having this, so he and the askari were playing ‘chicken’ with an 8,000+ pound elephant as to who ‘got’ the tree.

What we were all seeing was the mechanics of this ‘chicken’ dare. The young elephant would advance. The Landrover would reverse. They would hoot at the elephant and throw a brick at the elephant. The elephant would retreat. The Landrover would advance. And on it went. If memory serves, the ‘teenage’ elephant eventually gave ground and loped off into the reserve to see if he could find fresh pickings elsewhere – the husband returned to dinner looking triumphant.

All I remember is it was one of the funniest (if not rather scary!) stand offs I’ve ever seen and something truly never to be forgotten.

What does this have to do with water coolers you may ask? Well, truthfully, not much, but it does mention an elephant and the story is set in southern Africa.  It just so happens that The Africa Trust, to who AquAid donate a sizeable portion of their revenue to, builds Elephant Pumps that bring clean drinking water to communities throughout southern Africa. Have a look see. (No, the mammalian ‘hero’ of this story isn’t how The Elephant Pump got its name.)

*An askari is a trusted scout; usually at a lodge, they are responsible for escorting guests between their rooms and the main areas as well as a having a number of other responsibilities.

**Veld is open, uncultivated country or grassland in southern Africa. It is conventionally divided by altitude into highveld, middleveld, and lowveld.

The Elephant Pump is based on a 2000 year-old Chinese design that the CEO of The Africa Trust, Ian Thorpe, adapted to make it stronger, more durable and made and maintained using materials that are locally available in remote rural sub-Saharan African communities.

The core program of pump building in Zimbabwe has grown with 432 Elephant Pumps installed in 2012 compared to 367 in 2011.  This is now a massive program with the Elephant Pumps, managed by The Africa Trust, providing clean water for over 10% of the entire population of Zimbabwe. In addition to the core staff, it has been possible to provide contract work to over 40 other individuals during the course of the year.

“Each project has had a direct and positive impact on people’s lives. While it is perhaps invidious to highlight just one of them, I believe a good example is the success of The Elephant Pump project. Based on a 2000-year-old Chinese technique for lifting water, The Elephant Pump is inexpensive, simple to make and repair and made from locally available materials which give users a greater sense of ownership. When more than a billion people live without access to clean drinking water in the world today, it is hard to imagine a better cause than this”.

Diagram of The Elephant Pump

Ian Thorpe then became the first person to win The St Andrews Medal for the Environment on two separate occasions when his design for the Elephant Toilet was awarded in 2008. Since winning the medal, this toilet has been introduced throughout northern and central Malawi.

It has been seen that the pumps which have been well maintained over the years are at sites where at least one key person has been trained on how to maintain the pump. Instead of simply providing general training for the whole community, The Africa Trust has recognised that it is vital to train at least two people who are likely to remain in the community. Many young men leave the rural areas in search of work. Older women are often the best people to train, as they are less likely to move away.

Once identified, 2-3 pump minders per pump receive initial training when the pump is installed with further training after 3 months, 6 months and one year. By this time, it is expected that the pump minders will be able to do all minor repairs with informal payment in kind (often in the form or food) from the others who use the pump. Spare parts for the pumps (such as washers and rope) are made from waste products and the pumps contribute to increased agricultural production, so this approach to maintenance is sustainable.

Pump minders collect a low level of community contributions once the pump is productive to pay their wages and a small part returns to The Africa Trust. This helps pay back the capital cost over five years. Millions of people in over seven thousand communities use Elephant Pumps.