The Bupa Great Birmingham Run is the biggest half marathon in the Midlands.

England’s second city is the perfect stage for the event which attracts competitors from across the UK and around the world.

In 2012 Kenyan Micah Kogo won a thrilling sprint for the line ahead of Abera Kuma to set a new course record. Kogo, who dominated the race almost from the start, breasted the tape in a time of one hour and 17 seconds to deny his Ethiopian rival victory by two seconds with World record holder and pre-race favourite Zersenay Tadese third in 1:01:06.

On a very misty morning, Kogo – after losing the previous month’s Bupa Great North Run by a second – made amends by smashing the course record of 1:01:29 set a year ago by the legendary Ethiopian, Haile Gebrselassie.

The course takes in some of the city’s most iconic sights including the Bullring, the Cadbury’s factory in Bournville and Edgbaston cricket ground. Live music from ‘bands on the run’ keep you motivated every step of the way and thousands of supporters turn out to cheer finishers across the line on Broad Street in the heart of the city centre. ‘

Our Scott Barnbrook, of AquAid Birmingham, is quite the individual when it comes to participating in events for charity and/or improving his health. A recap here.

Good on yer, Scott, for competing in and finishing this rather marvellous and historical marathon!

Remember though, whether you’re running or exerting yourself in any kind of strenuous activity, you need to keep hydrated. This means drinking water. If you’re just zooming around your cubicle at 36 revolutions p/m, that also counts.

For any water cooler requirements, contact Scott at AquAid Birmingham, he or his team will be happy to help. 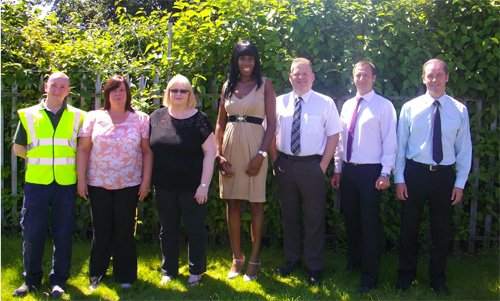 We’ve been in operation for 13 years. An indication of our commitment to what we do shows in our great staff retention:

We have a total staff contingent of 13 people who are dedicated to offering our very extensive customer base, 780 Bottle fed water coolers and 1538 Mains fed water coolers, with unrivaled service and attention.

In 2012 AquAid Birmingham raised £43 000 for our hand-picked charities that provide, amongst other sustainable projects, clean drinking water to communities in Third World countries. That translates to enough funds for 4 300 children to have drinking water for life.

We are delighted to announce that last year we scored 100% in our EDWCA audits. This means that not only do we adhere to the stringent EDWCA requirements and take pride in our work, but that our valued customers benefit from us meeting and surpassing these standards too.